Dénia is one of the main places where you can see cetaceans in the Spanish Mediterranean. In 2018, 73 were documented. 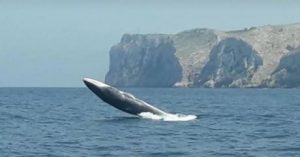 Is possible to rent a boat in Jávea to watch the cetaceans show.
It has been demonstrated how, for some years now, the migratory routes of whales, dolphins or sharks have the Cape of San Antonio, which separates Dénia and Jávea, as a reference. Several of the sightings are multiple. There was even the case of a sighting of seven rorqual whales together.
The passage of cetaceans a short distance from the coastline near Cabo San Antonio and the entire marine reserve has become common and this is also positioning Dénia as a privileged viewpoint of all this beautiful spectacle of nature.
The main species registered in Dénia are the bottlenose dolphin, the striped dolphin, the pilot whale, sea turtles, sperm whales and the fin whale, according to the seasons. Bottlenose dolphins, for example, are seen closer and closer to the coast throughout the year and it is possible to see it while you are enjoying the experience and sailing with us.
Between May and September the whale show takes place. The images of these giants of the sea have gone around the world and have made Dénia the reference that is today in the sighting of cetaceans in the Spanish Mediterranean.
Agradecimientos: Foto cortesía de Xàbia Meravellosa.
0Shares
PrevNext

This website uses cookies to improve your experience while you navigate through the website. Out of these, the cookies that are categorized as necessary are stored on your browser as they are essential for the working of basic functionalities of the website. We also use third-party cookies that help us analyze and understand how you use this website. These cookies will be stored in your browser only with your consent. You also have the option to opt-out of these cookies. But opting out of some of these cookies may affect your browsing experience.
Necessary Siempre activado
Necessary cookies are absolutely essential for the website to function properly. These cookies ensure basic functionalities and security features of the website, anonymously.
Functional
Functional cookies help to perform certain functionalities like sharing the content of the website on social media platforms, collect feedbacks, and other third-party features.
Performance
Performance cookies are used to understand and analyze the key performance indexes of the website which helps in delivering a better user experience for the visitors.
Analytics
Analytical cookies are used to understand how visitors interact with the website. These cookies help provide information on metrics the number of visitors, bounce rate, traffic source, etc.
Advertisement
Advertisement cookies are used to provide visitors with relevant ads and marketing campaigns. These cookies track visitors across websites and collect information to provide customized ads.
Others
Other uncategorized cookies are those that are being analyzed and have not been classified into a category as yet.
GUARDAR Y ACEPTAR
Abrir chat
Hello, Hola!
How can we help you? ¿Cómo podemos ayudarte?
Reserva Ahora